Posted on December 30, 2014 By Artemis Scantalides

If you have a blog on WordPress.com, at the end of every year WordPress.com puts together an annual report summary of your blog posts for the year.  Shoulders Are The New Cleavage Revisited was my most popular blog post in 2014 with 1,825 views on the day it was published.  Based upon that number, it is still second runner up to my 2013 blog post Unsexy Training Methods Produce Sexy Results that had 2,988 views on the day that it was published.

Overall my blog Iron Body By Artemis was viewed 55,000 in 2014 which is more than two times the amount it was viewed in 2013 – which is about a 60% increase in readers!  This is what WordPress.com said about it:

“The concert hall at the Sydney Opera House holds 2,700 people. This blog was viewed about 55,000 times in 2014. If it were a concert at Sydney Opera House, it would take about 20 sold-out performances for that many people to see it.”

Both insane and  awesome if you ask me!   THANK YOU to all the readers who helped to increase the number of readers for Iron Body By Artemis.

In addition to Shoulders Are the New Cleavage Revisited and Unsexy Training Methods Produce Sexy Results, other favorite posts were:

How to Progress the Ab Wheel Rollout from Kneeling to Standing

Unsexy Training Methods Take Manhattan: I Am Not Afraid To Lift Weights

Are You Mentally Tough?

The Day I Stopped Running

2014 was a significant year for me both personally and professionally.

Personally, I completed my goal of the Iron Maiden Challenge…

Some of you are probably SO sick of hearing about this, but even though it took me less than 7 minutes to complete, it was a three year journey within which I learned a tremendous amount about myself, about perseverance, and about strength training.  As a result, not only did I build great strength through the process, and learn life long lessons, but it also helped me to grow as a coach.  By training for this goal I acquired experience and knowledge that has made me a better and more knowledgeable lifter and coach and better equipped to help others on the same or similar path towards a strength goal.

Beyond the Iron Maiden Challenge, I continued to learn that strength is limitless.  Just when I thought I may have reached my max for strength for someone my size, with proper, safe training, I continued on to build more strength and surprised myself with a 28kg (62 lbs) pistol squat, a 26kg (57 lbs) weighted pull-up, a 30kg (66 lbs) Turkish Get-up, and a 245 lbs Dead-Lift.  I very much look forward to continuing to train for and achieving my current goals of all three Iron Maiden lifts with 28kg, a 32kg (70lbs) get-up, and a 275 dead-lift.

Strength is truly a journey, not a destination.  Just when you think something seems impossible or out of reach, (which is how I felt about that 24kg (53lbs) press for the Iron Maiden Challenge for a LONG TIME and now I can STILL press that weight, even post Iron Maiden! #StrengthThatSticks), remain steadfast and persevere because you WILL reach your goal(s).

In addition to completing the Iron Maiden Challenge I launched my I Am Not Afraid To Lift strength workshop series, became a ReebokONE Fitness Ambassador, and throughout the year was honored to learn that my writing and coaching was starting to be recognized by well known coaches such as Tony Gentilcore and THE source for personal trainers, The Personal Trainer Development Center with some of my blog posts repeatedly making their Top Fitness Articles of The Week.

Beyond my personal accomplishments, 2014 was a great year for Iron Body Studios.  We celebrated our three years in business anniversary and a year and a half in our current facility.  We launched our Online Training Platform through WeightTraining.com, created our Kettlebells Fundamentals Workshop, and started to build some truly amazing business relationships with stellar businesses including but not limited to Drive495, Mark Fisher Fitness, Results Driven Fitness, Pharaoh’s Army Fitness, Catalyst S.P.O.R.T., and NeuroKinetic Therapy (NKT). Below are some highlights from 2014. 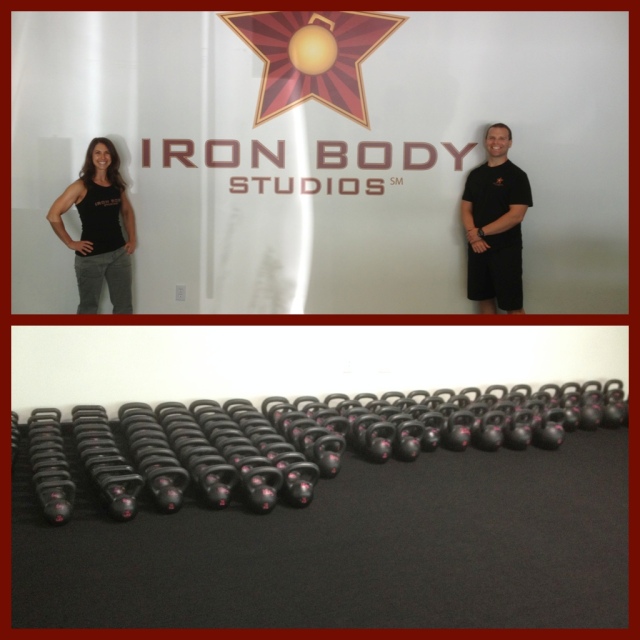 We attended the Original Strength Workshop.  Original strength has greatly influenced how we train our clients.  As a result we have incorporated it into all of our programs for classes, small group training, one-on-one training, and online training. 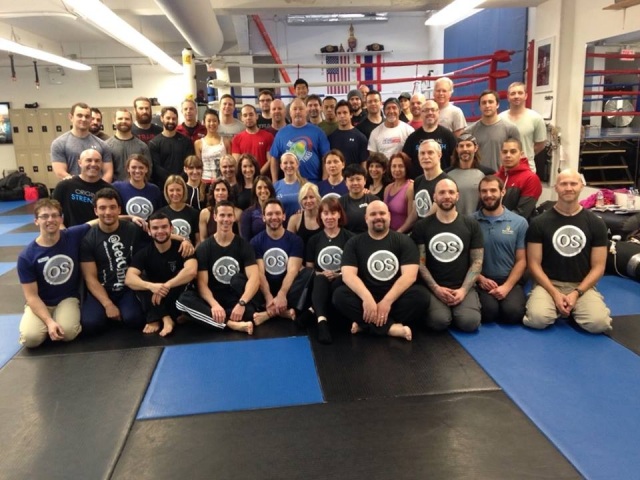 While we were in New York City that weekend, we spent some quality time with my brother and celebrated my 38th birthday with my brother, and our friend and colleague Ari Harris of Pharaoh’s Army Fitness and his girlfriend Maria.

We also launched our Iron Body Shred Small Group Training Program.  Its programming and required consistency has produced incredible results for our clients!

We partnered with Achieve Fitness in Boston and launched The Female Fitness Formula Workshop.

At that workshop, I gave Xena a whole new meaning and #BeXena not Edna was created. 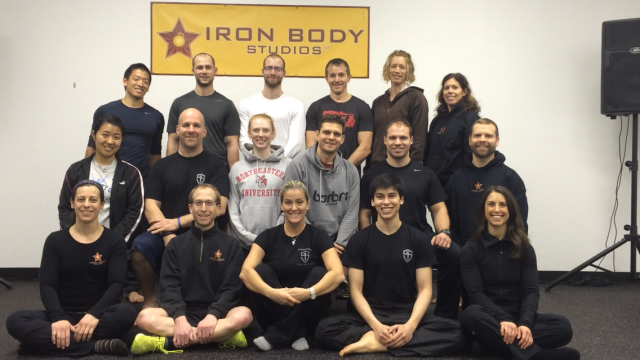 While I was in New York City I had the opportunity to swing by Pharaoh’s Army Fitness and visit Coach Ari Harris and spent some quality time with my brother, my friends and colleagues Kathy Dooley and Steve Holiner (a.k.a “Coach Fury”). 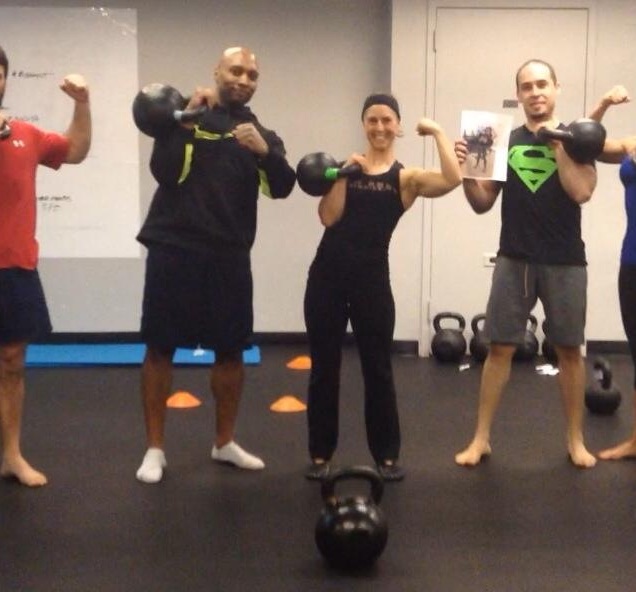 Eric and I attended an Indian Clubs Workshop with Dr. Ed Thomas… another opportunity for an experience of combined learning and shenanigans with colleagues and friends.

We hosted a NeuroKinetic Therapy (NKT) Level I seminar with the incredible Kathy Dooley! 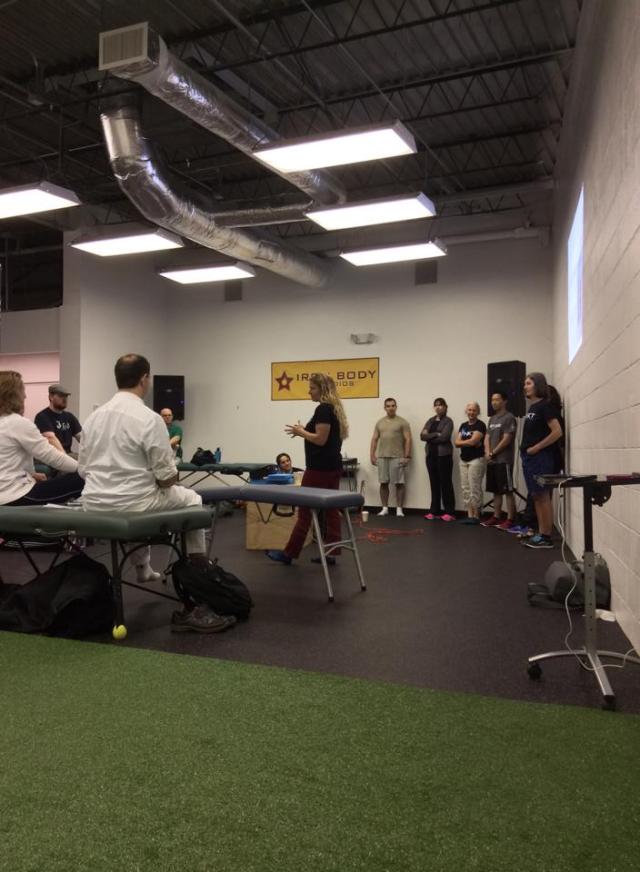 Kathy is my friend, colleague, and distance coaching client.  At that seminar she put me on the spot and tested my mental toughness by asking me to press 22kg (49lbs) in front of a large group of strangers!  Proof that not only do students learn from their coaches, but coaches also learn from their students. 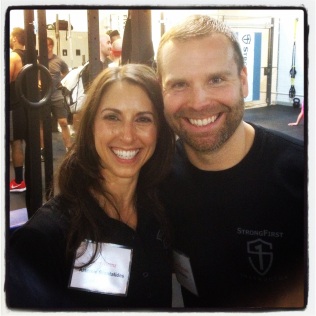 I also completed the Iron Maiden Challenge that weekend… 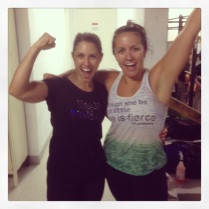 I launched my strength workshop I Am Not Afraid To Lift at Drive495 in New York City.

I taught a workshop to the incredibly bright and talented training staff at the amazing Mark Fisher Fitness! 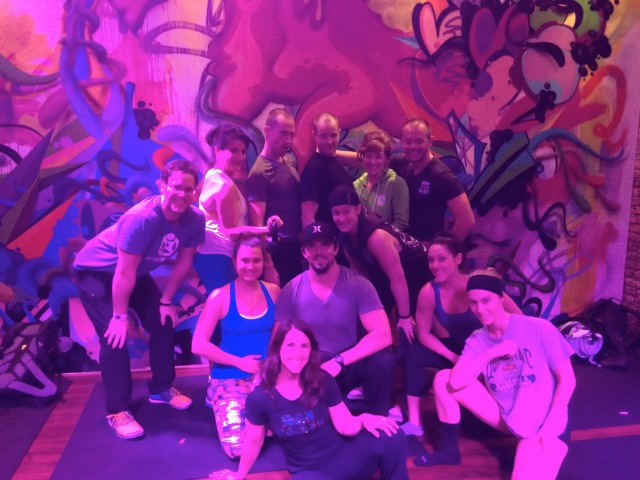 While I was there, Brian Patrick Murphy, Co-Owner of Mark Fisher Fitness asked me if I would be willing to record a podcast with him for MFF Best of Life Radio.  We talked about my Lift Workshop, Xena, empowering women through strength, the Iron Maiden Challenge, Iron Body Studios, a recent Facebook rant I had about how some people are always looking for a bargain or a discount, making your health and fitness a PRIORITY, my business and personal life with Eric, and on being HUMAN!  You can listen to this podcast here in Episode 9 of MFF Best of Life Radio –> http://bit.ly/1oxxiFa

In October, I also officially accepted my invitation from June, from Reebok to become a ReebokONE Fitness Ambassador. 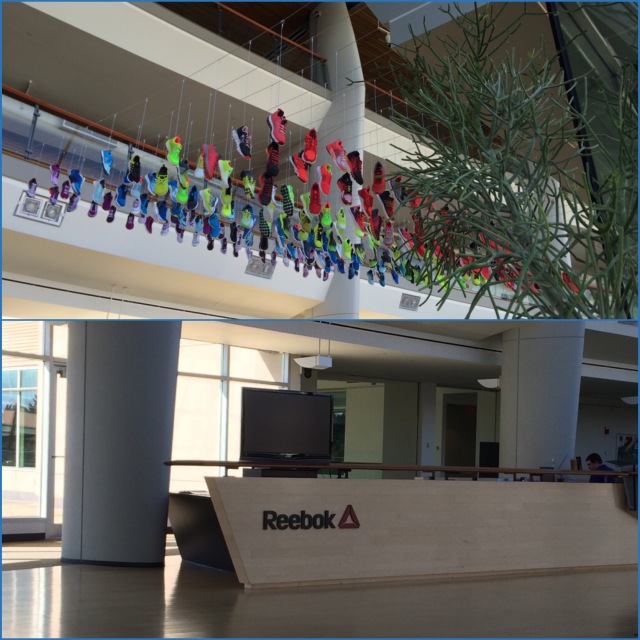 I am thrilled to be a part of the ReebokONE team and I’m excited to see what 2015 brings with this new venture!

In October we also launched our Online Training Platform through WeightTraining.com.

We offer one-on-one and group online training, as well as specific programs to help you reach your goals like my Attack The Bar Pull-up Program.

I presented my second I Am Not Afraid To Lift Workshop on my home turf at Iron Body Studios!

There were so many amazing moments at #LiftBoston that it was hard to capture all of them into a short video, but here are a few…

We had the pleasure of hosting a strong and vibrant group from Results Driven Fitness for a mini two-hour workshop.

Also in November we had our Fourth Annual Turkey Swing, which is always a blast! 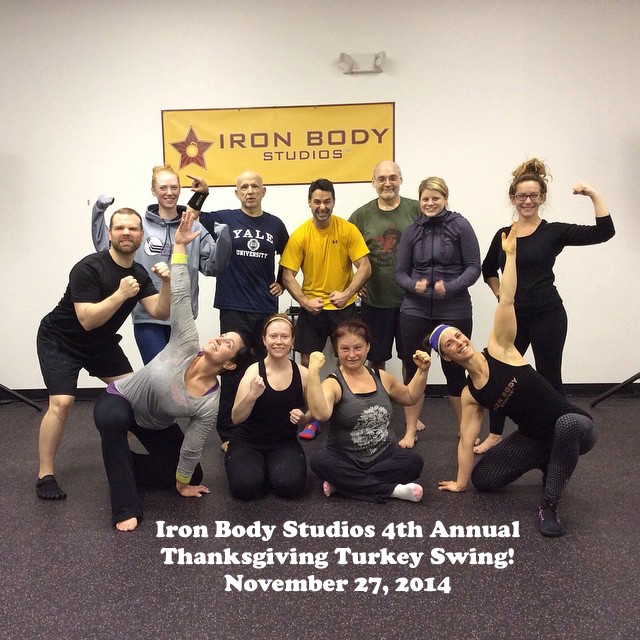 Here are some video highlights…

While we were in New York City, we spend time with my brother, my aunt and my cousin, and visited our friends at Catalyst S.P.O.R.T. and Mark Fisher Fitness.  We always have such a warm welcome in NYC and love visiting that city! 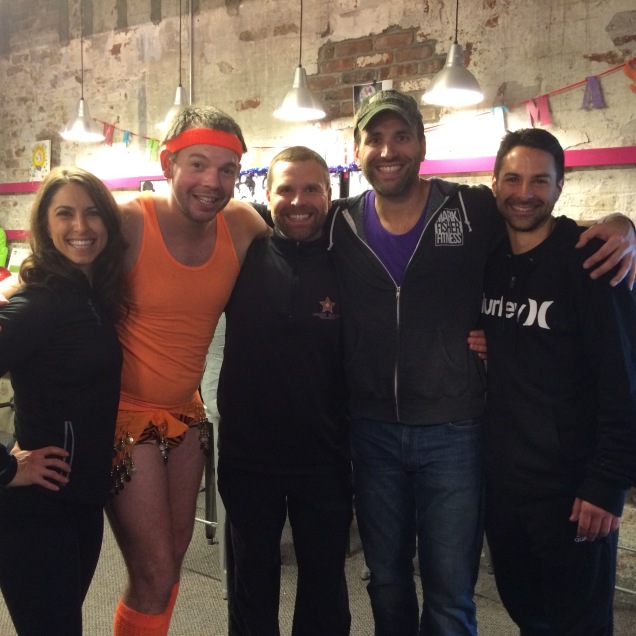 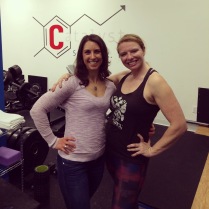 Clearly we have been very busy in 2014 and I am excited to see what 2015 has in store for both Iron Body Studios and Iron Body By Artemis.

In addition, I am launching a Women’s Strength Class at Iron Body Studios that starts this Saturday January 3, 2015 and will meet every Saturday at 8:30 a.m.  Class is filling up quickly and I’m very excited to have the women of Iron Body Studios come together and train as a group on Saturday mornings.  If you’re thinking about it, don’t hesitate to register because space is limited!

We also have a large group forming to train with us for the StrongFirst Level I Certification that will be here in Boston in August 2015.  If you would like to join our Kettlebell Instructor Small Group Training Prep then please complete the contact form below and we will provide you with information on updates as to when this small group training instructor prep will start, what it will entail, and the cost.

So THANK YOU for all of your support.

I look forward to continued growth and success in 2015 and to hearing how everyone’s training is going and what goals you have planned or have reached. 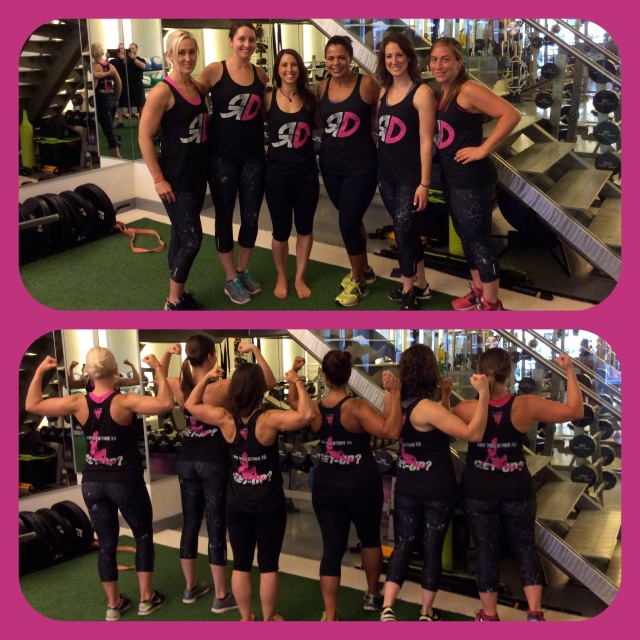