Posted on June 8, 2015 By Artemis Scantalides 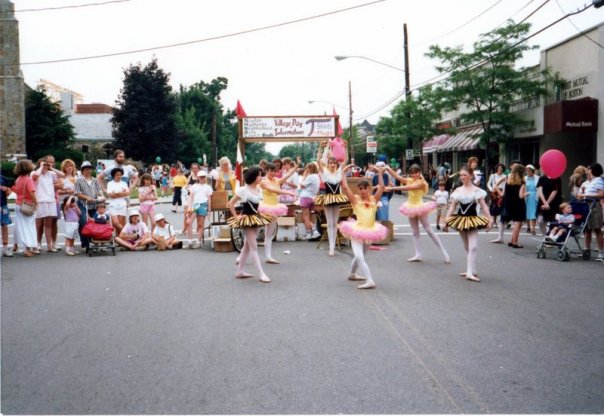 I am front and center in the yellow tutu with my arms overhead. I was 11 years old.

I started taking ballet classes in 1979 when I was 3 ½ with an Argentinian woman by the name of Madame Nora Irinova Venchi. Her name synonymous for “Drrrrrama” with a strong, thick rolled RRRRRR.

To the children she was “Madame” and to the adults she was “Nora”.

She will always be “Madame” to me.

She was a fierce lady with a heavy accent who barely cleared five feet in height. She always dressed impeccably and wrinkle free from her hairstyle that was pulled back so tightly it resulted in a homemade facelift, to the character shoes on her feet, with layers of bracelets that decorated her arms. The noise they made added emphasis to the direction she gave when teaching classes as she gestured dramatically, almost as if she wore them on purpose for this specific reason.

She was neurotic about the hardwood floor in her dance studio (as she should have been), and played an old school record player with vinyl records for music during classes.

Sometimes it would skip when we were practicing jumps in class.

At that time, cassette tapes were not widely used and CDs and iTunes did not exist yet.

When we would bourrée across the floor and practice our swan lake arms she used to yell at us “DO NOT FLY PAN AMERRRRRICANNNN!!!” with emphasis on the rolled ‘R’ and an exaggerated ‘N’.

When I was old enough to graduate to pointe shoes she handed me a pair and told me that they were Russian and they were the best and you do not wear toe pads, only lambswool if you absolutely need it. She said it in a way that made me think I was a wimp if I needed to wear anything in my pointe shoes.  So, as long as I was taking pointe class with her I did not wear anything.

On some days that I took class with her there was another class that met before ballet class called “Russian Gym”.

The name itself was frightening. What goes on in RUSSIAN GYM????

It was a 90 minute calisthenics class without any breaks that utilized the ballet barre for the exercises for the first 60 minutes of class and then for the last 30 minutes of class she would have you do combinations across the floor for cardiovascular conditioning.

It was calisthenics on crack.

Only the brave, strong, hardcore women attended this class and if you asked Madame about Russian Gym, she would give you this look like, “Do you really think you can handle it??” and shake her hand from side to side, and sometimes she would just tell you flat out in her heavy accent, “I don’t think that you’re ready for the Russian Gym…”

I remember coming in on the days that Russian Gym met before my ballet class and I could hear Madame yelling instruction, stomping her character shoes, and clapping her hands violently as her bracelets jangled like an extra exclamation point at the end of each instruction.

This class brought out her true colors. She was a female version of Jack LaLane meets Mikhail Baryshnikov with no mercy.

Madame required that you were of a certain age in order to attend this class, but truly I think it was you had to be brave enough to take this class and endure the wrath of Nora possessed by Russian Gym.

This barre class actually produced results with calisthenics, along with a cardiovascular component, that did indeed make you stronger and more fit.

If you asked my mom about Russian Gym she will report to you that when she first starting taking Russian Gym, she took it two times per week and within 3 months not only did she get strong and fit but she also lost almost twenty pounds without changing anything in her diet. When she started taking Russian Gym it was not her goal to lose weight, she just wanted to get strong and fit, but the weight loss ended up being a pleasant surprise.

At present, modern day NON-Madame Nora Irinova Venchi barre classes are everywhere. They are the trend, sort of like Jazzercise used to be.

I am breaking my internet silence on this topic, so here it is… let the hate mail commence…

I first learned of barre classes about five years ago when I was working for a commercial gym. One of my colleagues was a former dancer for Alvin Ailey. In addition to being a personal trainer, he also taught Pilates and other group exercise formats.

I learned this fact as my colleague described the format of the modern day barre class to me with excitement and the words “lengthen” and “tone” came out of his mouth as he tried to encourage me to become certified to teach the class. I tried to remain polite so I smiled and nodded as I listened. As I listened I thought if someone wanted a class like that why wouldn’t they just go to a classical ballet barre or pure pilates class? Why did people need some pilates/Tracy Anderson themed hybrid “toning” class endorsed by false advertising to feel like they were participating in an effective workout??

Since he was a dancer and a Pilates instructor I could understand his enthusiasm. However, as a former ballet dancer myself, and based upon my negative experiences of having my body picked apart because in all of the 23 years of my dance experience I never managed to achieve “long lean muscles”, regressing back to a training modality that feeds into all of the dysfunction that I worked so hard to break free of for 23 years is the absolute last thing I wanted to do.

I wanted to lift weights, swing kettlebells, get strong and feel empowered through strength. I wasn’t interested in donkey kicks and “feeling the burn”. Thanks, but no thanks.

I knew that if I wanted to “feel the burn” I could do a kettlebell complex. That will light your body on fire. Not only will you feel the burn but also you will actually truly get stronger through this veritable weight bearing activity.

I understand how these classes build a sense of community and that contributes to why they are so popular, however, what I do not like about these classes, and specifically the marketing for these classes, is that they feed into the notion that women need to do a female-specific type of exercise format in order to get fit and there are specific exercises out there and exercise formats that will “tone” your muscles and give you “long lean” muscles.

Not only is exercise not gender specific, but as Brynn Jinnett, Former New York Ballet Member states, “‘It’s misleading to tell people that when they feel a part of their body burn or get sore, that they’re getting thinner or stronger.” Read more on this subject from Brynn HERE.

In addition, I think that whatever you’re doing in the gym should directly pertain to your activities in your every day life and help you to move better and get stronger in order to perform your daily activities. In what world are we doing donkey kicks, butt pulses on demi point, and passing a ball from between our knees to the next person for our daily activities???

In life we (dead) lift, we (suitcase/grocery) carry, pull things and push things.

Take it from my mom who attended a barre class once:

Mom: “It wasn’t like the sky opened up and the angels started singing. We used the bar for like 15 minutes and the rest of the time doing bodyweight exercises with a ball between our legs or behind our knees. I spent 25 of the 55 minutes chasing the ball around that kept popping out from behind my knee or from between my legs. I didn’t get much out of it. I could do the exercises we did on the floor of my bedroom with the dog hanging over me.

The instructor’s biggest concern was if I knew what a “tuck” was… & we had to do these leg raises sitting under the bar while holding the bar & I kept hitting my head on the bar. I don’t know why they call it “Barre” class because we only used the bar for like 15 minutes and that includes the time it was hitting me on the head.”

I have also heard the argument, well if someone is not doing anything but only likes to go to barre classes, isn’t something better than nothing??

I suppose, but has anyone given thought to the fact that dancers sustain injuries from the repetition of standing on the balls of their feet and excessive external rotation, from Achilles tendonitis to various ankle, knee, and hip injuries and now, present day trendy barre classes incorporate repetitive positions like this in order to perform the exercises in class to the masses, to people who are not dancers?

This coupled with the fact that many of the women attending these classes probably wear high-heeled shoes outside of class in their every day life adds to the repetition of these positions that could potentially lead to injury.

Shouldn’t these people be engaging in something in their training that helps to counter these positions and helps to build better movement and strength instead?

In my opinion present day trendy barre classes feed this fear of building muscle that many women have and steer women away from the desire to hinge, squat, push, and pull weight in the gym in order to build muscle, get stronger, and move better so that they can lift their children, groceries, luggage, and complete other tasks in real life. In addition, these classes feed into the myth that women should be doing female specific training, because we are delicate flowers after all, and that a specific exercise, and training modality will change your genetics to give you long, lean muscles, because all women should look like a Kate Moss cog in a skinny-fat factory.

Madame Nora didn’t use the words “lengthen”, “tone”, or “long lean muscles” to advertise Russian gym and her classes were packed and produced real, kick-ass results.

She sold her classes by demonstrating that in order to take these classes and to be successful in these classes that you needed to have the desire to be strong and tough and to not be afraid to mess up your hair because you sweat.

Madame Nora celebrated muscle, strength, and mental toughness because these aspects are what help women to be successful in daily life.

Nothing will ever compare.

No matter how fancy the logo, stylish the activewear or fanciful the false advertising, nothing will ever match Russian Gym, the original barre class.

Next I Am Not Afraid To Lift workshops coming to:

Also join me for Keep It Simple Nutrition & Conditioning, coming to: