The Cycle of Training

The other night as I brushed my teeth before bed I was thinking about how awesome and summer-like the weather has been here in Boston this month and about how for the last two summers I was training for the Iron Maiden Challenge.

As I had this thought I said to Eric, “The last two summers I was training for the Iron Maiden Challenge…”

To which I replied, “I am so glad I’m not training for that fucking thing anymore!”

Which is pretty much how I felt after I completed my kung fu black belt.

Now, it’s not that I don’t like training for a goal, we all know that I am a very Type A, goal oriented person who is most in her comfort zone when surrounded by structure and working towards a goal.

It took me four years to train and receive my black belt in kung fu so I am accustomed to training for long term goals, but that doesn’t make it any easier to remain dedicated.

The training itself was very challenging.

Remaining mentally strong to stay the course in order to complete the goal required mental toughness in itself.

Training for this goal also had its not so fun moments when I had not so great training days, or felt like I wasn’t making any progress, or had to make sure that I stayed on program and didn’t do anything extraneous in my training that would take away from progress towards my goal.

I definitely had my moments that I thought it simply was not possible for someone my size to press 24kg (53lbs) but I talked myself out of those negative thoughts and just kept training.

As I wrote in my post “You’ve Completed a Goal, What Next?” if you’ve worked towards a long term goal and then accomplish it, often there is a feeling of sadness or loss after the high of accomplishment has worn off. In addition, after the goal is reached, often one can feel lost, like “Ok, now what??” therefore it’s important to have a plan for your next goal or a plan for your next phase of training so that this feeling doesn’t leave you feeling apathetic towards training whether you are training for another goal or per Dan John, just enjoying some “Park Bench” training.

Whether you are training for a specific goal or not, it’s always important to cycle through different phases of training.

You cannot always be training for maximal strength or else it will result in overtraining and you will stop seeing strength gains.

Even as I trained for the Iron Maiden Challenge, I would cycle in four to six weeks here and there when my focus was not on continuing to build strength, but rather to simply maintain a certain level of strength, perhaps even lose a little, and focus on strength endurance and a bit more conditioning. Like when I did the 10,000 Swings Challenge.

Or if you are training for an endurance event like a marathon, you cannot always keep up with that kind of mileage year round or else you will burn out and it could potentially result in injury. In my case, the last year that I was training for my kung fu black belt I was practicing kung fu five to six days per week sometimes twice per day. This is something that is not sustainable long term and your body will reach a point that it needs a change of pace.

I completed the pistol squat and just needed to work towards the pull-up and the press. I took a little break, focused on some different things in training, and then started back to continue to work towards building strength for these two lifts.

Around the end of January/beginning of February I had a brief few weeks when I saw the results of my training.

For about three weeks I was able to press 24kg (53lbs) regularly for 10 singles in my training once per week and when I pressed it, to me it looked like I was pressing 20kg. It was BANANAS.

Not my best pull-up, but I’ll take it and make it stronger.

Those three weeks were a lovely interlude into superhuman strength gains, especially for someone my size who does not budge over 118lbs, but after that, it was time for me to lose a little strength.

As I mentioned previously, it’s important that you cycle through different phases of training in order to ensure that you do not over train and that you continue to see results.

At the end of April I finally had time to sit down and think about what I wanted to do next in my training and write myself a new program with a focus on strength endurance and more conditioning, while maintaining a certain level of strength.

In addition I’ve been itching to get back to kung fu, and even run (WHAT?!!) which most of you already know.

I’m going to get a little less strong and that’s OK. I need to lose a little strength. My body needs a new phase of training.

It’s scary to make this change but it’s exciting at the same time. The funny thing is that my “less strong” today is still stronger than my strongest three years ago or even one year ago! I know even at “less strong” that I will still maintain a 24kg pull-up and 24kg pistol squat, but maybe not a 24kg press.

With the summer weather upon us it’s felt liberating to get out and go for a run or train a kettlebell complex in the park. Taking a break from running for two years to focus on a strength goal helped me to have a different perspective on running. I am excited to get back into it one or two times per week, yet at the same time I don’t feel like I HAVE to do it because I know that I went two whole years without running and still maintained a high level of fitness. Read more in my post Three Things I Learned From NOT Running For Two Years.

Yes I like to lift heavy things and then put on a Michelin man suit and spar people. It’s all very therapeutic. 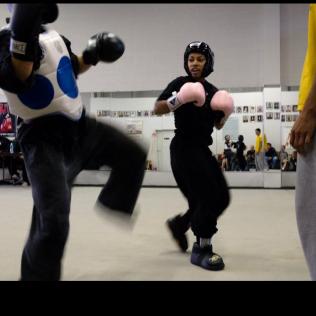 The last two summers I spent very focused on a Bus Bench training program to work towards the Iron Maiden Challenge.

Now that, that goal is complete, I can have a little fun in my training, enjoy a Park Bench training program and get back to the things that I did not get to do for two years like kung fu, kettlebell complexes, and test out how strong my double snatch is after pressing like a maniac for a year.

It’s always important to have a goal in training, even if that goal is to take a break from working towards something specific for a little while and to have some fun.

At some point, maybe when the cold weather rolls around again, I will get back to training for the Iron Maiden Challenge lifts with 28kg (62lbs), but until then I am going to enjoy the fact that for the first summer in two years I do not have the deadline of a strength challenge looming and I can have a little fun in my training, get back to kung fu, and maybe even contemplate that lofty goal of the American Ninja Warrior I’ve thought about … 😉

Join me for Keep It Simple Nutrition & Conditioning, coming to:

Also join me for Superhuman Strength Training at the Perform Better Functional Training Institute in Providence, Rhode Island on May 30, 2015 or my workshop I Am Not Afraid To Lift.

You can learn more and register HERE. 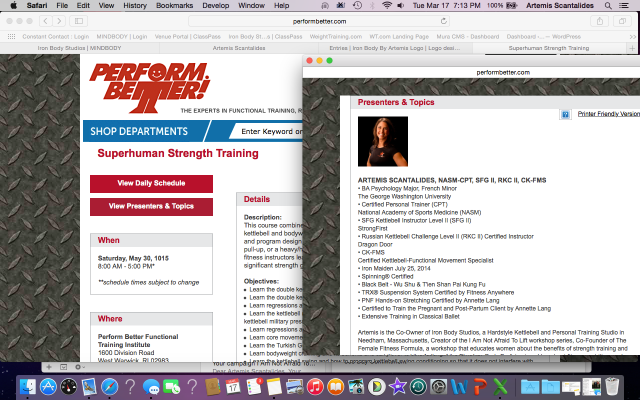 Next I Am Not Afraid To Lift workshops coming to:

← Three Things I Learned From NOT Running For Two Years
Carryover in Training – Che Pazza! →

2 Comments on “The Cycle of Training”